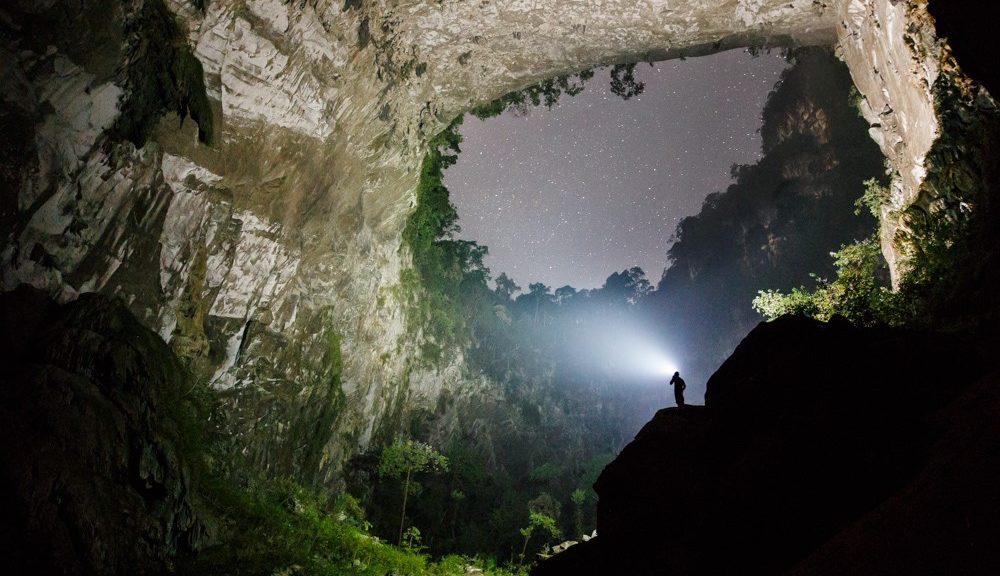 GEOLOGY OF SON DOONG CAVE
The Phong Nha-Ke Bang National Park in Vietnam contains the oldest karst system in Asia, between 400-450 million years old. Hang Son Doong itself is relatively young, with the analysis of sediment dating it to be only 3 million years old.

Formed on the edge of a fault zone, Hang Son Doong has been carved out by the mighty Rao Thuong River as it erodes away the limestone, forming the enormous tunnel beneath the Annamite Mountains. Giant sinkholes, known as dolines, have collapsed sometime up to 300’000 years ago, creating massive openings to the outside world. Cave pearls the size of baseballs have been formed by water dropping from the ceiling.

Hang Son Doong
HOW BIG IS SON DOONG CAVE?
The first expedition had been halted by an 80m high calcite barrier, which was jokingly dubbed the ‘Great Wall Of Vietnam’. It wasn’t until their second expedition in 2010, when the Great Wall was finally climbed and the end of the passage was found, that Hang Son Doong was determined to be the largest cave in the world.

At over 5km long, with sections reaching up to 200m tall and 150m wide, Hang Son Doong is large enough to house an entire New York City block, complete with 40 story skyscrapers. With a total measured volume of 38.5 million cubic metres, this comfortably surpasses Deer Cave in Malaysia, which was considered to be the previous record holder. Stalagmites up to 80m high have also been surveyed, the tallest ever encountered.

Life is tough for the minority people here, due to their isolation from the outside world. Access is only possible by foot, and the dense jungles surrounding Ban Doong prohibit the cultivation of most crops. The discovery of Hang Son Doong and the subsequent expeditions that now pass through the village have seen new opportunities arise for the community, who now can earn extra income by working closely with Oxalis to protect the conservation of the area.

For many people, being able to visit Ban Doong and meet its welcoming villagers becomes a highlight of their trip. Ban Doong offers a view of way of life that has been unchanged for centuries.